Please kindly find Standard Club Europe's circular, under our message, as to their policy for 2017 / 18 period.  Club announces that they will support their members with no general increase on both P&I and FDD. As usual adjustments will be offered to members when taking into account individual loss records and exposure. There is also good news that Club will return 5% of the mutual call of 2016 / 17 P&I policy year.  A credit note is expected to be issued in February and members can offset this when paying their 1st instalment.

As usual once the group reinsurance contract is renewed, the difference compared to the previous year (whether up or down) will be reflected on the members agreed renewal premium for 2017.

Below you can find our comparison table. 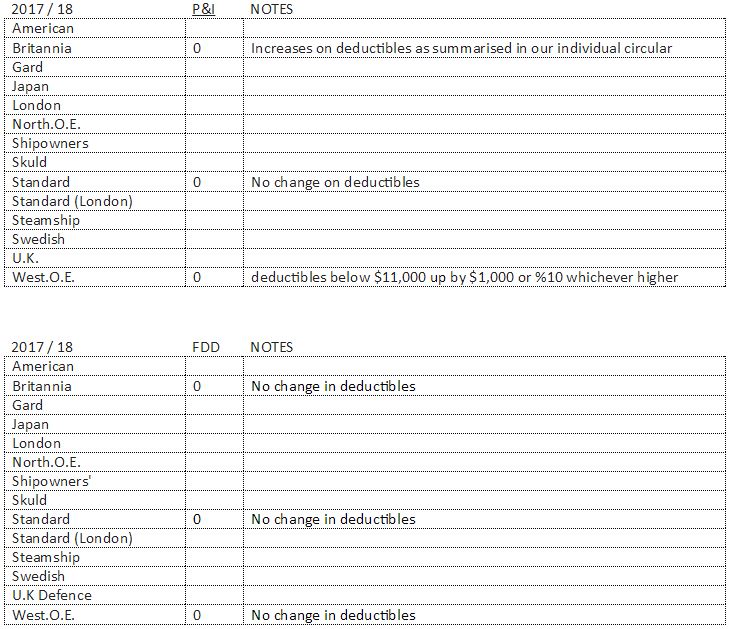 The board reviewed the club's financial position and requirements for the 2017 renewal at its meeting in Tokyo on 21 October 2016. The club's underwriting results remain stable and a healthy investment return is forecast for the year. As a result the reserves of the club are expected to increase at the year ending February 2017. Consequently the board has decided to make a return of mutual call in respect of the 2016/17 policy year.

All open years are performing satisfactorily. No calls in addition to the Estimated Total Premium (ETP) are expected and the board has determined to return to members 5% of mutual call for the 2016/17 policy year. Credit notes for this return will be issued in late February 2017 to allow members to offset the return against premiums payable during the course of the 2017 policy year.

This class is performing satisfactorily. No call in addition to the ETP is expected. The board determined that the release call margins should remain at the same level as the P&I class: 2%, 3% and 7% respectively for the three open policy years; the 2014/15 policy year is expected to be closed in May 2017.

The board determined that no general increase should be applied this year either to any class of P&I premium (mutual, charterers or offshore) or defence premium. As in previous years, the board has asked the managers to agree bespoke renewal terms with members whose claims and risk profile are out of line with their premiums.

Any adjustment in the International Group's reinsurance costs will be reflected in members' premium.

The ETP will be debited in the same manner as the 2016/17 policy year.

As in previous years, a further update will be issued in due course in relation to other renewal matters.