Please kindly find Britannia's circular, under our message, as to their policy for 2017 / 18 period.  Club announces that they will support their members with no general increase on both P&I and FDD.. The changes on the P&I deductibles are shown in the above table which you can find in the below original circular as well. There is also news on previous years deferred calls being reduced. 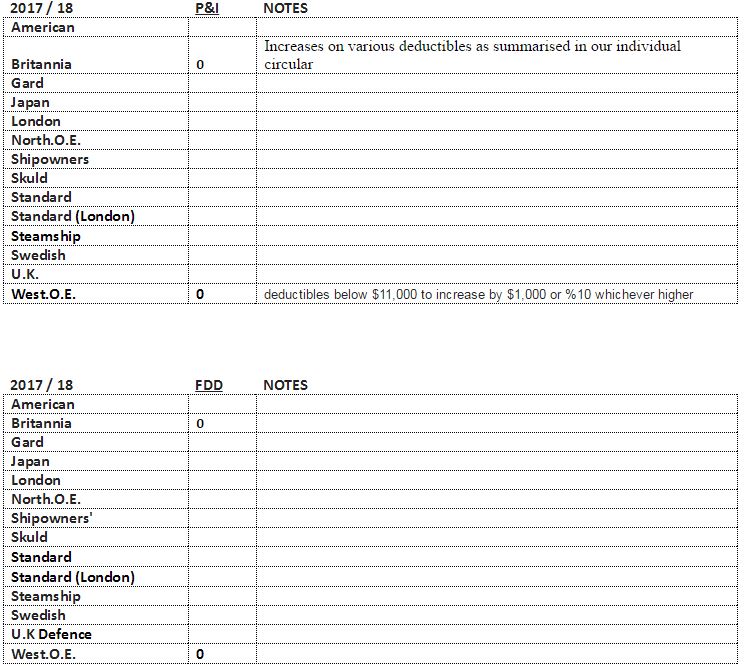 Britannia waives a further USD11.5m of deferred calls while requiring no general increase in advance calls for 2017/1820/10/2016

"Britannia is continuing to support its Members with further waivers of deferred calls while also deciding not to increase its general rates for either P&I or FD&D in 2017/18. The Association's strong finances allow it to take these positive steps, which assist Members in the most mutual way during the continuing difficult shipping market.

The Association has waived a total of USD51 million in recent years while retaining its Standard & Poor's 'A' (stable outlook) rating."

More detailed information on all of the call decisions for both Class 3 and Class 6 will be circulated to Members shortly, with a summary set out below.

Both the 2014/15 and 2015/16 policy years are developing within projections, enabling Members to benefit from further waivers of deferred call.

Whilst still early, 2016/17 is also developing favourably, with benign claims levels both within the Association's retention and on the Pool.

After a disappointing result in 2015/16, investment returns in the current year to date have been strong, boosted in particular by equities, and are well above the longer-term rate assumed for the policy year.

The Association's projected capital position for 20 February 2017 (which includes the benefit of funds available in Boudicca) remains comfortably over its economic capital benchmark. That financial strength enabled the Committee to agree an 'as expiring' rate for P&I advance calls in 2017/18.

The budgeted deferred call remains at 45%.

Taking into account inflation and the fact that they have been unchanged in recent years, the Committee decided that for 2017/18 deductibles would be adjusted as follows:

The Committee also decided that:

The Committee recommended that:

This class continues to see improvement.

Accordingly, the Committee decided that, for the fourth year in a row (and the sixth year out of seven), there should be no general increase in the

The Committee also decided that:

. the 30% budgeted deferred call for the 2015/16 policy year be collected immediately.

The Committee recommended that: